The Kalimantan Forest of Indonesia

The Kalimantan Forest in West Borneo is known for producing some of the best Mitragyna Speciosa in Indonesia. Studies of samples taken in various parts of Asia show Indonesia as having the highest Alkaloidal content.

Our leaf is grown organically in a wild setting, lab tested for microbials, heavy metals and treated with gamma rays. There are no distinctions made between strains or vein colors when farming and stems and veins are meticulously picked out.

We are currently in the process of qualifying for the GMP program with the AKA. We will be testing for alkaloidal content. Our product is milled using a dedicated Nano Grinder giving a very fine flour like consistency.

Green is the most common type of leaf, but widely varied in effects, Green leaf can be oxidized creating a scenario allowing for higher concentrations (or conversion) of 7ohm, or unoxidized with high levels of Mitragynine. Supergreen Maeng Da is one such green strain that seems to have maximum amount of 7ohm conversion, ie it's Mitragynine level is conducive (perhaps optimal) in converting it in the body.

Shade dried green leaf has the highest concentration of Mitragynine and will most likely not have much 7ohm effect, but be most stimulating. A precarious balance seems to exist between 7ohm conversion and 7ohm blocking by Mitragynine, as it is a cyp3a4 inhibitor, which prevents conversion to 7ohm. 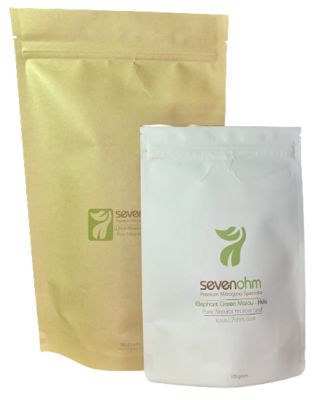 Effects Appear to be Very Sensitive to Dose 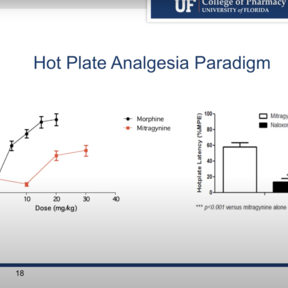 The effects of kratom are dependent on the concentrations of mitragynine found in the leaf. Higher concentrations seem to completely block all opioid activity, while moderate to lower levels seem to be more conducive to the 7ohm effect.

What has the Strongest 7ohm Effect?

The plant does not produce the opioid alkaloid 7ohm, instead it is converted through oxidation to a small degree by the plant, and on a larger scale by our intestines and liver. It is now thought that the majority of the opioid effect from Kratom comes from oxidation of Mitragynine into 7ohm by cyp enzymes in our body. It turns out that high concentrations block opioid activity at mu and moderate to lower levels like that found in red strains might allow for the optimal amount of conversion of Mitragynine to 7ohm.

Satisfaction guarantee. If for any reason you are not satisfied, return it for a full refund or exchange. Free consultation by experts and informational blog below.